A while ago I did a post on 10 quotes that really summed up some of the experiences we have with endometriosis/chronic illness.  Recently, a lot of similar quotes have been popping up in my Pinterest feed, so I thought this might be a good time to do another one of those posts.

1)  “When I finally find a pain-free position…but then I have to pee.” 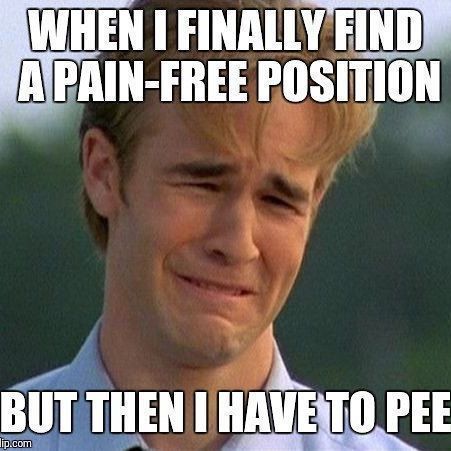 The quote is superimposed on an image of James Van Der Beek ugly-crying.

This one doesn’t really need an explanation, but boy, is it true (and frustrating). 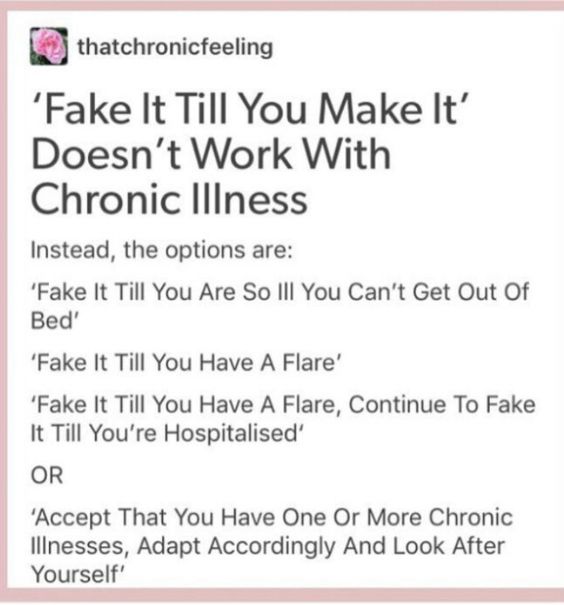 Image is a tumblr post by thatchronicfeeling.  It reads:

“‘Fake it till you make it’ dosen’t work with chronic illness.

Instead, the options are:

‘Fake it till you have a flare’

‘Accept that you have one or more chronic illnesses, adapt accordingly and look after yourself.'”

I suspect most of us are guilty of trying to fake it til we make it far too many times, largely because there are enormous societal and economic pressures to do so, even though we know it doesn’t work and isn’t conducive to long-term health.

3) The Most Annoying Thing 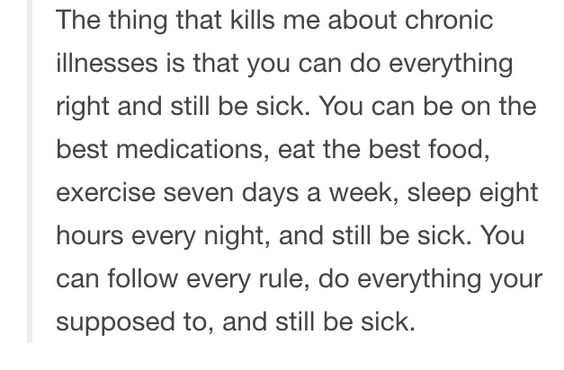 You’re telling me.  I flew halfway around the planet to get the best surgery currently available only to discover I have another underlying condition that the surgery can’t treat.  I sleep ten or twelve hours some days and I’m still fatigued beyond enduring.

On the other hand, I did go to my Bangladeshi friend’s house the other night and eat all the high-FODMAP food, but honestly, if you could taste her mum’s dahl, you’d eat it if it killed you. 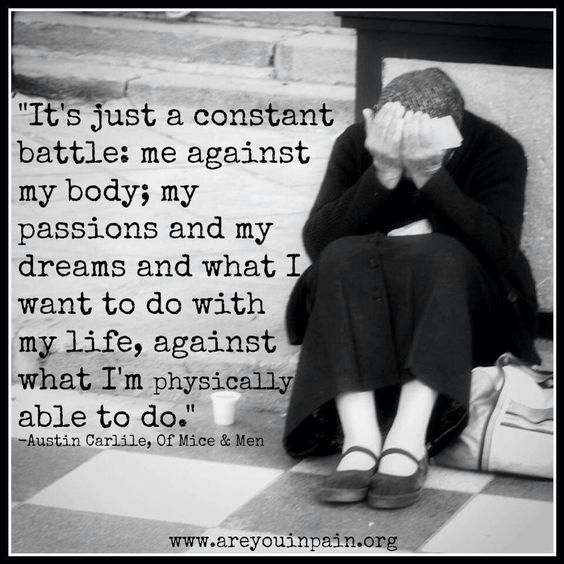 Image is a quote from Of Mice and Men: “It’s just a constant battle: me against my body; my passions and my dreams and what I want to do with my life, against what I’m physically able to do.”

This really hits home.  As I write I’m supposed to be at beautiful Pearl Beach catching up with a dear friend whom I don’t see nearly enough.  Instead, I’m at home in my pjs because I couldn’t handle the journey. 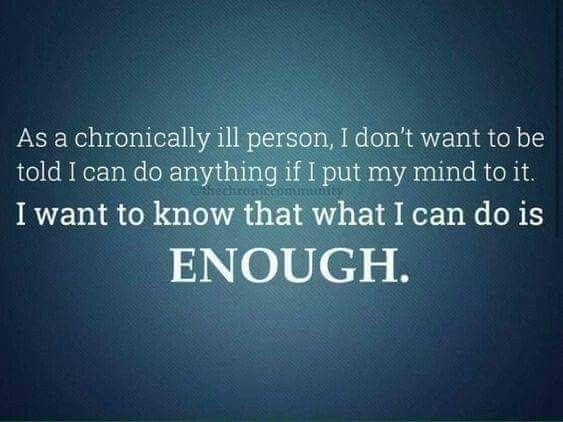 Image reads: As a chronically ill person, I don’t want to be told I can do anything if I put my mind to it.  I want to know that what I can do is enough.”

Absolutely.  It doesn’t matter how determined I am to be a prima ballerina when I can barely make it to the gym twice a week through fatigue and pain.  Rather than being told “you can do anything!”, which kind of rubs it in our faces that we can’t, tell us that we are doing really well as we are (because we are). 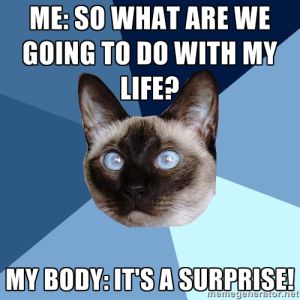 Meme of a cat face on a background partitioned into six shades of blue.  Texts reads:

“Me: so what are we going to do with my life? 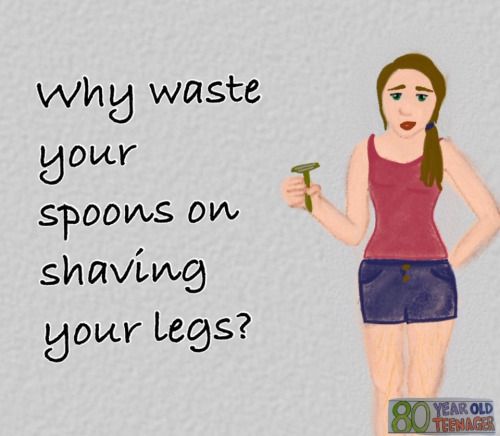 Image reads: Why waste spoons on shaving your legs?

I’ve had many a day in between laser sessions where I have thrown out my skirt or dress plans in favour of trousers because shaving requires far, far too many spoons.

If you can’t bear the sensation of leg hair want to know more about removal options, have a squiz at this post where I evaluate the pros and cons of a few different choices. 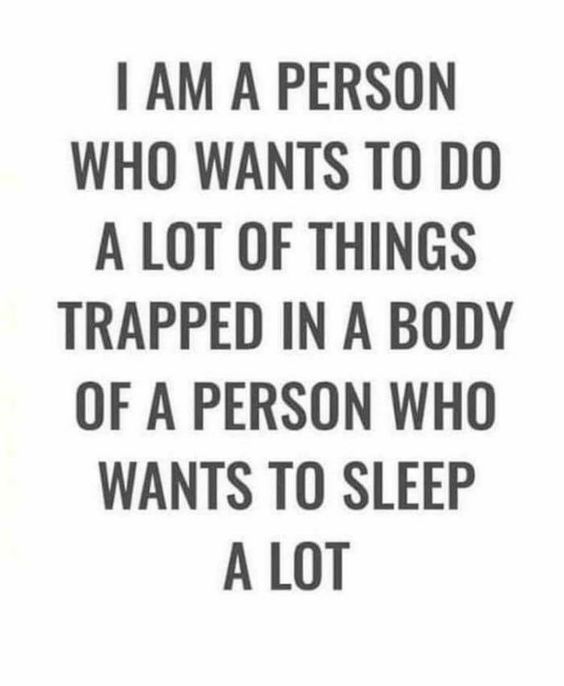 Never a truer word was said. 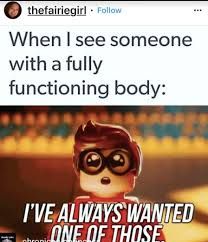 Image is a tumblr post by thefairiegirl.  It is a picture of a shocked lego-person in glasses with the text:

“When I see someone with a fully functioning body:”

and the lego person says, “I’ve always wanted one of those.”

Wouldn’t it be nice? 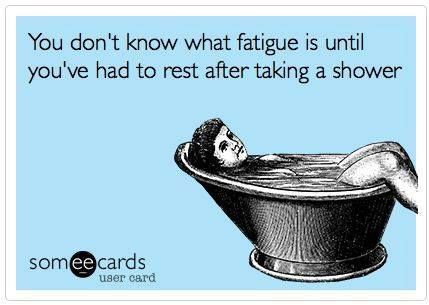 Image is from someecards.  A vintage image of a lady in a bathtub on a blue background, with text that reads: “You don’t know what fatigue is until you’ve had to rest after taking a shower.”

I mostly take baths now for that exact reason, and I still have to rest afterwards.

What quote resonates with you the most?

If you enjoyed this post and want to see more of these quotes, follow me at https://www.pinterest.com.au/bubblesinthebrain/ and look for my Endometriosis board.