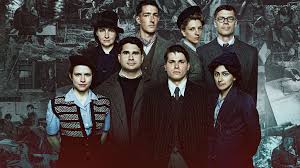 It’s no secret that, if you’re sick a lot, Netflix is an almost invaluable tool.  One of my latest Netflix binges is “Churchill’s Secret Agents: The New Recruits.” It follows 14 people from very different backgrounds as they attempt to pass the training that would have let them into the SOE (Special Operations Executive) in World War II.

The SOE were Britain’s covert operations group during WWII.  They supported the French Resistance, conducted acts of sabotage, and generally engaged in bad-assery all over Nazi-occupied Europe.  Some of their most famous operatives include New Zealand-born Nancy Wake, aka the White Mouse, and Pearl Witherington, after whom my corgi is named.  One thing I love about the SOE is that it was not afraid to include women.  Women were taught exactly the same skills as the men, had to pass exactly the same training, and were sent out on the same dangerous operations.  Read more here about some of the brave men and women who served in the SOE, and their surprising backgrounds.

The Netflix series consists of five episodes, each around 45 minutes long.  The 14 trainees are taught and assessed by three British Army officers as they learn to fire a pistol and a rifle, complete an assault course, sneak through forests dodging Nazis, pick locks, withstand interrogation, send and receive Morse code, and kill a man with their bare hands.  As each new challenge is introduced, viewers also learn a little bit about the SOE, its agents, and some of its operations.  The trainees dress, eat and act as if it were the 1940s throughout, including only having access to the wireless and 1940s newspapers at breakfast.  Like the original agents the trainees are of a mix of ages and backgrounds – there’s a mathematician, a paralegal, a real estate agent, a drama teacher and a former paratrooper, among others.  One Polish lady actually had family in the resistance during WWII, and her great-aunt was killed for her work against the Nazis.

Some of the trainees are clearly unsuited for the training, such as the lady in the first episode who won’t crawl under some barbed wire in the assault course because it will mess up her hair.  Others ace the assault course, including a gentleman with only one leg and a lady who is incredibly good at literally everything despite standing no taller than I did at age 10.

In addition to their success in the tasks set, the instructors pay close attention to the group dynamics and personalities, and aren’t afraid to fail people out who can’t adjust their personalities to the situation at hand.  Overconfidence is not appreciated any more than timidity.  Some trainees actually realise themselves that they are not up to the demands of the course, and bow out gracefully.

It is fascinating to see the trainees learn the different skills, and to hear them developing immense respect for the real SOE agents.  I really enjoyed the development of those who made it through, and confess to being surprised at some of them.  I won’t give away any spoilers about who does make it to the end, because it really is worth watching.  You wonder throughout, “Could I do this?  If I had been alive during the war, could I have done this?  Would I have been prepared to put my life on the line?” It does encourage you to engage in a bit of self-analysis as well as analysis of the people you are watching.

10/10 for this show.  Beautiful Scottish highlands, stately homes, an education and entertainment all at once.  It doesn’t take long to watch, and I definitely recommend it.  Just fast-forward the bit with the rats.  You’ll know what I mean when you see it.