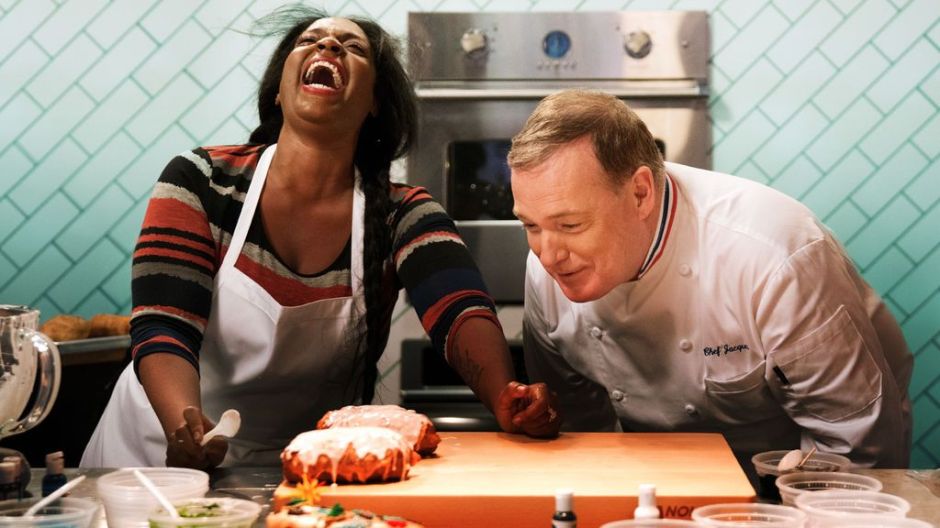 Do you love pinterest fails, french accents and cooking competitions?  Then Nailed It is probably for you.

Hosted by Nicole Byer, with chef Jacques Torres as head judge and a random guest judge (usually also a culinary expert but sometimes not), the show follows the same format each week.  Three enthusiastic but amateur American folks stroll onto the show and are asked to recreate a variety of professionally-made cakes.  There are two rounds.  The first one, “Baker’s Choice,” requires the contestants to choose one of three cakes, biscuits or other confection, to recreate.  We’ve seen emoji biscuits, lip-shaped cake pops and people-face cookies, and even a football grandstand made up of guacamole and various dippy bits.  Whoever wins Baker’s Choice gets a sparkly gold hat and some sort of fun kitchen thing, like a cake decorating kit, knife block or stand mixer.

Round two, “Nail It or Fail It,” really brings out the big guns.  All three contestants have to recreate the same cake, which is usually massively complex and heavily decorated.

There’s been the above shark chomping down a diver, Rapunzel in her tower, a unicorn, a volcano, a hovering teapot pouring tea down into a cup, and even Donald Trump (highly recommend watching that episode if you ever wanted to know what Trump might look like if he was a zombie cake).  Some bakers do surprisingly well (although rarely well enough for it to not be funny), but most create horrifying nightmares.  The cakes are all tested on taste as well as appearance, and the winner of this round gets $10,000 and the allegedly soon-to-be-collectable Nailed It trophy.  Then everyone jumps in for a group selfie and we move on to binge-watch the next episode.

Delightfully, the show is not actually particularly judgey.  The panel isn’t scared to have a giggle at some of the disasters plated up for them (my favourite was one that looked quite good but had all the judges spitting it out because the contestant had muddled sugar and salt), but they are supportive of the contestants’ efforts and quick to point out what they have done well.  It seems like most contestants feel they actually learn something.

Nicole Byer and Jacques Torres work well together, with Byer’s rather sarcastic enthusiasm working well as a counterpoint to Torres’ quiet humour and to-die-for french accent.  Seriously, he says “buttercream” a million times on this show, and I could still listen to him say it a million more.  Torres also teaches Byer and the guest judge some tips and tricks whilst the contestants are working, which is helpful for viewers.

Overall, it is an incredibly fun show to watch, and with each episode only lasting half an hour it is a really nice way to have a quick moment to unwind and fill you with the lust for cake and biscuits.  10/10 would watch again.

One thought on “Nailed It: The Netflix Show for Bad Bakers”